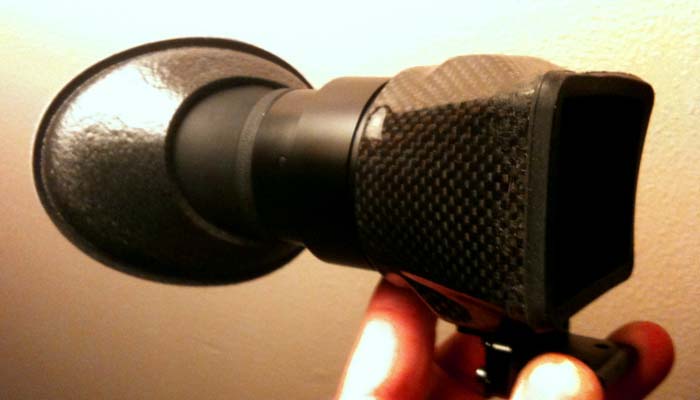 For $400, ( Ok, B&H has them on special for $349 ) none of what I’m going to reveal next should be needed. The repairs I’ve done and problems I’ve had are to be expected from something at maybe 1/3 of the price where you can say ” well it was cheap, and the fix wasn’t bad, some I’m ok with it.” 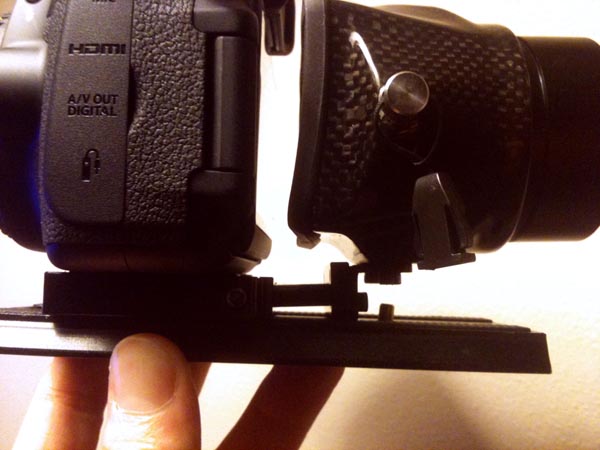 When I first got the Letus Hawk LCD Viewfinder Loupe, the mounting holes stripped out. The inserts in the very sexy carbon fibre body are soft steel. My next replacement had ok inserts, but some weird blob, probably fungus developed on the inside of the lens. Ok, third time is a charm, right ? Well yes, for a while.

After a bit of use, the hex screws came loose. I tightened them, and one of them stripped out again. This time, I just wasn’t in the mood to exchange the unit again, even if it is covered under warranty. Instead I realized that since the bracket design was flawed, I needed to come up with a better idea. The fix was very simple, epoxy. Given that the body is carbon fibre, its made of either polyester or epoxy resin. Epoxy will stick to either very well, and I had some good quality epoxy that dried glossy black.

First I cleaned up the hood body by wiping it off with paint thinner, and letting that completely evaporate. Next I actually glued the rubber gasket on using ACC ( crazy glue ) by running the glue around the inside of the rubber bumper. I slipped the bumper onto the loupe body and this just isn’t going anywhere.

Next in the area where the metal bracket meets the loupe body, I sanded that area a bit to improve the bonding area.

I slid the loupe bracket into its socket on the camera, and made sure it was sitting the way its supposed to, and then placed the loupe itself on the LCD screen in proper alignment.

Finally I mixed up the epoxy, about a teaspoon’s worth, and applied on the area where the bracket mounts to the loupe body. The epoxy I had was very thick, and I applied a pretty small amount to just cover the immediate bonding area. Since I was working above the actual camera LCD screen I was being super careful about not dripping or squeezing out any epoxy onto the screen surface. 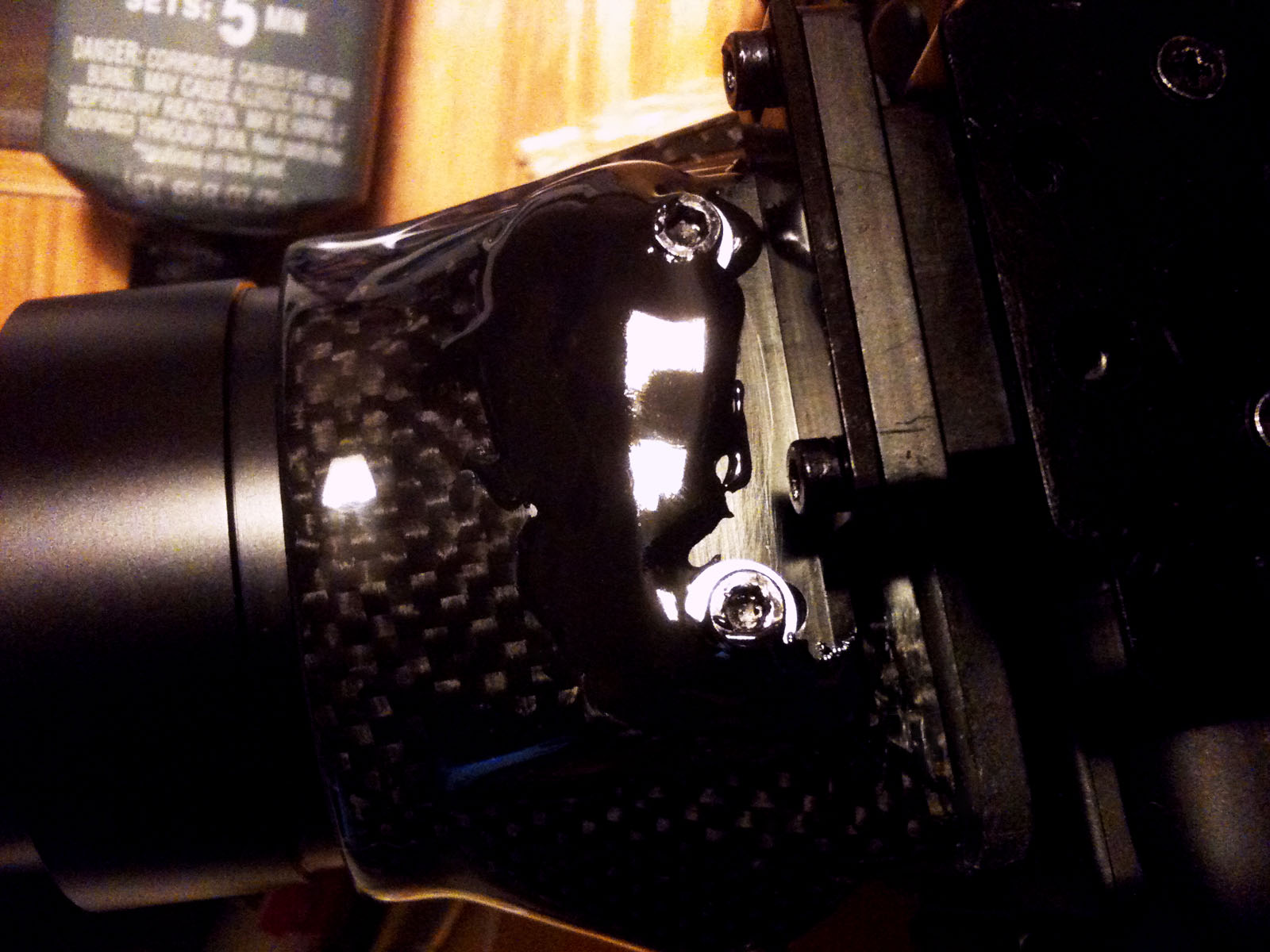 I then screwed in the two screws, each with some epoxy on their shafts. Even though one was stripped out, it still gave me some grab, and the steel pin glued in place doesn’t hurt anything.

With the remaining epoxy, I globbed it on and around the metal bracket and out onto the loupe body for additional bonding area. I also got epoxy into the screw slots in the bracket to again help with getting  the best bond I could. Epoxy does have body strength and I was just taking advantage of it.

I let it dry over night, and so far, so good. It looks like I’ll now have a solid dependable connection that isn’t letting go all the time. Sure its hard to design small reliable brackets likes this, but this is old ground in engineering. The answer is simple : hardened steel or stainless steel, not the cheap soft steel screws and inserts that are currently used. Also, if you haven’t yet stripped out your screws ( it takes 2-3 adjustments to do so in my experience ) you can add a #4 washer ( read really small ) between the screw and the bracket. This will stop the bracket from moving away from the camera when you tighten it the one or two times that you can.

So my word to Letus is : get some hardened stainless steel bolts and inserts, or just change the mount completely… please ! the great optics deserve a better mounting system.

What started out as a simple question has become a more complicated answer. There are a lot of people out there saying “Just Shoot Flat” on the web. In what is now the first part of this series of tests, I’ll say yes. In high contrast situations like snow in sunlight, by all means turn down the contrast control. In taking a look at the 60D’s dynamic range I had a question thrown at me – am I looking at a NLE / software scope or hardware scope in judging whats going on ? I have both so I put them to the test.
Let me explain and show you something interesting. In the first part I talked about if 100 IRE = 235 or 255. On the scopes in my NLE, the codec was clearly clipping at 100 IRE, there was nothing above. If I plug the 60D’s composite out into my Tektronix scope there is a surprise, over brights ! In the image below you can see that I’ve got whites hitting about 105 IRE. I could not get anything hotter then that from the camera. The flat top areas at about 97 IRE are in fact the onscreen text overlays. So in response to the poster, yes the camera puts out hotter then 100 IRE on its video outs, but the codec which you actually record to ins’t giving it to you. In a word, that sucks, Canon, H264 has more to offer then what you have limited us to. Let us have everything the spec can handle : 10 bit 4:2:2 or 4:4:4.

Good science means you can repeat the results. Today I ran the HDMI out of my 60D into a MXO2 and used Matrox’s Vetura capture software to grab the video output to ProRes 1080. That worked as expected and I grabbed a short clip, opening and closing the iris to get a range of exposure values. The shot was nothing special, just the MXO2 sitting on my desk.
In this shot which looks about right for exposure the scopes show something very interesting, I’ve got whites at 109 IRE! However, the clip from the camera is only 100 IRE, hard clipped. 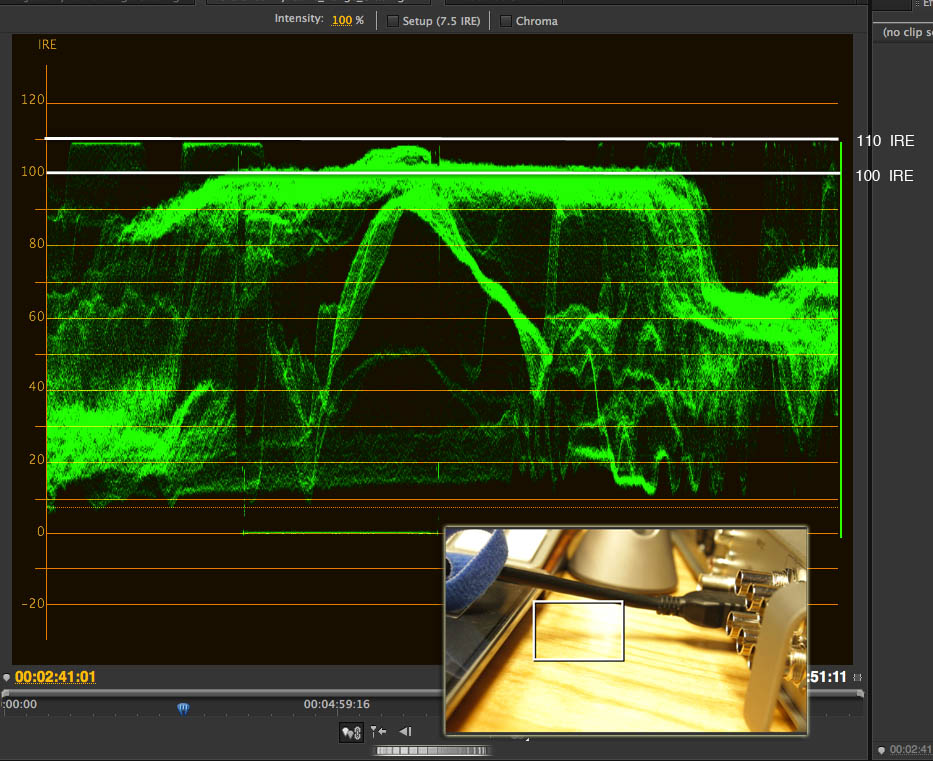 With this info in hand, I’m going to try to dig up a chip chart and run some tests to see if the camera is compressing its hot signal down to 100 IRE compressing the range, but still retaining highlights values, or if the codec is simply hard clipping everything over 100 IRE out. If the codec is hard clipping information, that means using the camera’s video out for monitoring even with a scope is not accurate. You can see it on the monitor, but not record it to the card. This would be seriously troubling if it proves to be the case which I am suspecting will be true.

What started out as a pretty simple series of tests got a lot more complicated. I completed another round of tests using a simple chip chart. Now I need to make one disclaimer here, the chip chart I got my hands on was not a great one. It wasn’t one of those expensive official 10 stop charts, but rather a printed one that came with an old copy of On Location. Before you all get excited about this, please consider what I needed for these tests : a way to generate some cleanly stepped values for highlights. In this purpose you’ll see the chart did just fine. It also let me look at some other more interesting things that the camera is doing, especially comparing the output of the hardware scopes to what the codec records.
A big question here is, what happens when  video out is over 100 IRE – is the codec clipping ? Initial tests indicated it was, but in this series of images, it appears that the camera is actually processing the image data down to generally fit into the range of 0-235 / 100 IRE max. It seems to be compressing the top end down to preserve whats in the image.

This does however bring up more problems :  the camera’s video out is not an absolutely accurate way of knowing whats really being recorded ! This completely and totally flies against everything any video camera has ever done. What comes out of video out should be exactly the same as what is recorded ! Now while it appears that the camera is in fact preserving all the image data you see on video out, it means that any sort of monitoring from the camera is simply inaccurate. You can not use scopes to setup the camera, or to try to match them the way you would a conventional video camera. This even means that an expensive several thousand dollar video monitor is something of waste as it may not show you anything more then what a cheap one will. The fact is, a monitor introduces its own variables in terms of what it displays and how. It makes the me almost want the days of NTSC back where everything was far more standardized, repeatable and reliable. It seems in the era of new cheap HD digital everything, standards are out the window unless you want to spend serious money.
Each of the following images can be clicked on to see a full size image.
Take a look at how the camera sends out video, compared to how it records it. The first thing I want to say is, I’m shooting “flat” as per internet buzz about how you are supposed to shoot to get the most dynamic range from the camera.
In the very first screen shot, its clear that with contrast at min, the blacks are really elevated. Guess what ? I almost succeeded in getting 7 bits worth of gray value ! If you see my whites are at 90 IRE while my blacks are at 30 IRE, thats just 60 IRE worth of range, a 40% reduction of what just plain old composite video can carry, never mind our digital video formats.

Next I cranked up the exposure to see what is really going on with highlights. While the hardware scope shows a little small difference, back in the digital world two things have happened :
1. The over bright whites have been pushed down to 100 IRE.
2. The rest of the signal has also been compressed !

This means that no image data visible on video out has been per se lost, but is has been compressed down to less dynamic / bit range by the codec. I”m not saying this is so much bad, but not what any one expected.
Another exposure variation, not nearly as over exposed with distinct steps in the overbright area. The codec has safely brought them back into “legal” range. However, with contrast on min, black levels are at about 50%. Hey I may of just made 7 bit images with 8 bits to play with.

Another shot where I just cranked up the exposure, but still the codec has compressed the highlights.

Here I dialed the contrast back to mid level. I have shades that are starting to look like black. They are still too hot, but I’m getting better.
Finally I turned the contrast all the way UP ! I finally have real blacks, and I’m making the most of the color space. If you are shooting a flat scene, increasing contrast can well be a good thing. Yes this completely go against what some folks have been saying, which is to just shoot with reduced contrast all the time making for a “raw” style image. This isn’t RAW, not by any means. Creating images that look like them, but are actually only holding 7 bits of color vs RAW”s 12 is just wrong.

Same exposure, but contrast set to min, I have again reduced the usable range of gradation.