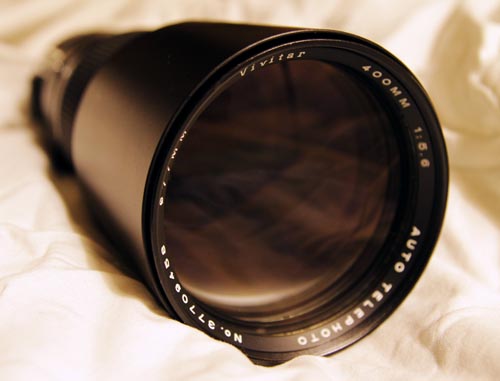 Once upon a time, only pro’s could afford long fast glass. Serious amateurs though craved for long lenses too, but could only afford a fraction of what serious pro’s would pay. Enter the slower speed long lenses. With 400 ASA film, you could certainly get great shots, with grain, while the pro’s got the same shots on 100 ASA film. These days reasonably priced longer f2.8 lenses are common due to advances in glass making and manufacturing. This has left a lot of these old and slower lenses collecting dust, or selling for very cheap.
Here are some shots from the lens:
Vivitar ( Tokina ) 400mm f5.6 Lens Test from Steve Oakley on Vimeo.

f5.6 would hardly get most people’s interest these days. However, if you take a look at the really long glass from Canon and Nikon, like say their 600mm lens, its a 5.6 to at a hefty $6k price. Now I’m not going to pretend here, those lenses are ultra sharp, use LD glass, and the best focus motors around. They are for serious still shooters. Video however doesn’t require the same level of ultra sharp thats shooting stills does. In fact a somewhat softer lens can help reduce or eliminate moire and stair stepping seen  dslr video. Autofocus is a non issue as well for video.
Taking into consideration that the APS-C sensor has a 1.6X crop factor, that really turns a 400mm lens into 640mm, still at a now very respectable f5.6. The APS-C sensor also is using the sweet spot of the lens in the center. Any CA or vingeting in the corners of a full frame sensor are generally not an issue with APS-C.
With those thoughts in mind, lets check this one out. There are  plenty of odd brand lenses out there, but I’ve found most older vivitar glass to be good. While I’d be a little cautious about real off brand glass if you couldn’t try it out first, this one seemed interesting.
Its serial number indicated that Tokina actually made it. That was one big plus for starters. Next it was multicoated. Any lens that isn’t is going to have flare and lose contrast. Unless you are really going for a retro look, make sure its multicoated.
The lens I got looks like it came out of the factory box practically. Its not uncommon to find super clean glass like this when its one thats off most people’s radar. After all, who’d want a big heavy made of metal 180deg focus turn manual lens thats on the slow side ?
WHile this lens is made in several different mounts, I got this one with an OM mount. A cheap adapter for OM->EOS and I was off and running. 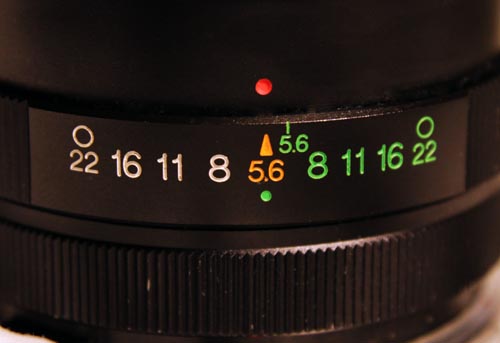 First, the iris ring is different. Its marked and operates in both direction. The center is 5.6 and you can turn it left OR right to stop it down. I suspect that one way was for stopped down shooting, the other was auto iris mode where the camera closed the iris down when it shot a frame off. My lens may of had a minor mod so it stops the lens down in both directions. It doesn’t bother me since it only goes to f22.
This thing is heavy. Forget any idea of hanging this on the body without support. If you are shooting bare bones, use the built in tripod collar. If you are on rods, you need to have a lens support for sure. I’d highly recommend that your lens support have a strap on it that loops over the lens to lock it into place or the weight of the lens could very easily twist things sideways during handling. This lens demands respect for good handling.
The focus ring is slightly stiff, or perhaps what I would call firm. That’s a perfectly good feel for a long lens where its easy to knock it out of focus. Its got a nice long 180 deg focus rotation. A minor downside is that it only focuses to 13ft / 4m. If you need to get closer, consider an extension tube or two. The focus is also in the normal direction for video / film glass.
Shooting
At first f5.6 might seem to be a problem limiting this lens to sunny day work only. We’ll talk about that shortly.  Consider how with a long lens like this DoF is  very shallow to start with. I’m often at F8 or F11 when I can. Here are some quick numbers on DoF so you can see what I mean. 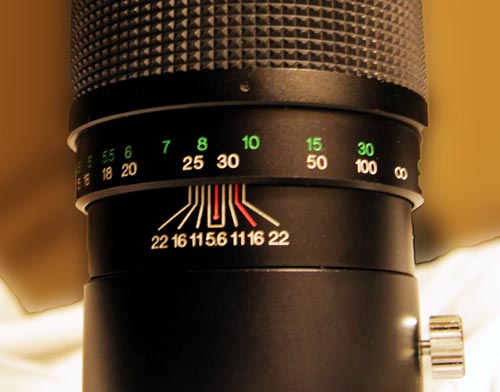 400mm F8 @ 13ft, DoF 1″
400mm F8 @ 20ft, DOF 3″
400mm F8 @ 40ft, DoF 1′ 2″
13 ft will let you fill 50-70% of the frame with a cat’s head.
20 ft is a head and shoulders shot, a very tight one.
40ft, you are shooting a waist up shot of some one or a bit less. 1′ is just enough to hold focus on them so that their body is sharp. Your background will drop out quite nicely.
100ft 400mm F8  7′ 8″
This will get you a full body shot, with just a little bit of play room. You’ll still have shallow enough DoF even in bright sunlight, but with some safety margin here.
So that F5.6 really isn’t the limitation it seems to be. Considering that you can go to ISO 1250 on the 60D / 7D / 1D / 5D you can start to approach some lower light situations that would of not been possible 25 years ago with ISO 400 speed film, even pushed one stop to 800. This isn’t a shoot under  dim streets lights lens ( unless you can live with ISO 2400 ) but it can work in bright city areas, or places where you ‘d be lighting to F5.6 or F8 anyway.
Also know you need a real tripod and head to work with a long lens like this. My Vinten 6 works ok, but a manfrotto 500 series head will never be smooth enough. With a long lens like this, even small movements translate to big image changes, so pan and tilts need to be slow and controlled. Fast pans will bring rolling shutter effects into maximum effect, for better or worse. WInd will also be something to deal with as well.
Of course I’m saving the best part for last, the price. You can pick these lenses up for around $100 or sometimes less because no one wants them. That, for now makes them a steal.
Next, I want to find a good 1.4X converter to add in for 560mm ( 900mm APS-C to full frame equivalent ) at a modest F8. Sounds like fun !
« Canon 100mm F2.8 Macro Lens Test Vs Tamrom 70-200 2.8» How To DIY Fix Your Intuos 2 Wacom Pen Button in 30 Seconds